We Came to Play, Not Pose: Dilemma of Women in Sports

The mediatisation and branding of women sports is key for its development and for widening the access of women and girls to sport.

But here comes a major problem. In our consumer society, sex is a popular marketing tool: what makes a “good ad” is widely known and sex is an important ingredient. You only have to look at advertisements for cars, perfumes, fizzy drinks, jeans and all kinds of beauty products to see this. Can we really make sport into an economic commodity like the others? And if so, how can this advertising principle be applied to the world of sport?

This is a valid question which recalls the media treatment handed out to our sportswomen and it seems particularly relevant with the approach of the London Olympic and Paralympic Games, when women medal winners will be in the limelight. Like the media, sport is a magnifying mirror of our society.

No one can deny that women are still trying to find their place in the typically masculine domain of sport. One way in which they seem to do this, or which has been forced on them by advertising and the media, is to go down the path of hypersexualization. To be noticed and talked about, the sportswoman needs to show off her figure, her feminine attributes, rather than her technical, physical skills. 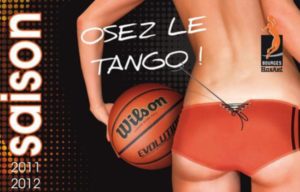 How are sports stakeholders branding women sports in practice? In France, the latest example is the 2011/2012 pre-season campaign for the flagship Bourges Basketball team, where the poster showed one woman’s buttocks with a basketball ball on her hip and the slogan “Dare to Tango.” (Tango is the nickname of the team.) It would be reminiscent of the marketing strategy of a certain calendar, Dieux du Stade, produced by Stade Français rugby club for several years, were it not so equivocal and irrelevant: it is not the sportswoman’s body which is portrayed, but a single part of her anatomy — you cannot even see her face. This poster really seems to reduce the sportswoman to a sex object. It is also difficult to see the connection between the slogan “Dare to Tango” basketball and the image shown. The “tanga” thong is not actually required clothing for the tango or for basketball. What is shocking here is the gratuitous use of sex and eroticism.

Although sport has been an effective channel for emancipating women, or possibly because of that, in women's sports, the question of dress codes, like that of media treatment, is crucial today.
Click To Tweet

This campaign, like others before it and in line with what is too often the media coverage of women’s sports in general, distorts the idea of the body as it should be viewed in the context of sport, and reinforces the concept of hegemonic masculinity, which is defined by sociologist R.W. Connell as a pattern of gendered practices that reinforces male dominance and female subordination in society.

Seen from this angle, then, sport is a social structure which reproduces male domination by (over)emphasising “skills” such as strength, power and aggression, according to author Lois Bryson in an essay in Sport, Men and the Gender Order, and by excluding women through portraying them in a “decontextualized” way.

Shouldn’t the sports movement be fighting against this portrayal? Of course, the financial stakes for elite sport are high, but nevertheless it seems very dangerous to make sport into an economic commodity in its own right.

The marketing strategy behind this campaign is wrong, as well. A 2011 English study, Prime Time from the Commission on the Future of Women’s Sport (Women Sport and Fitness Foundation)  showed recently that fans of both women’s and men’s sports are primarily interested in the technical prowess and authenticity of the athletes rather than the shape of their bodies.

Sportswomen deserve different media coverage from the treatment to which they have been subjected.

Although sport has been an effective channel for emancipating women, or possibly because of that, in women’s sports, the question of dress codes, like that of media treatment, is crucial today. Even if sport raises the issue of the relationship with the body, its essential qualities remain the bringing together of athletes, and the quest for the perfect, effective movement, and personal excellence.

In branding women sports, hypersexualization is a problem because it forces women outside the sphere of their sports participation and reduces them to the status of sex objects. This serves to destroy the emancipating relationship with the body that comes from doing sport. We need to promote women’s sport, but please don’t let us lose sight of the specificity of sport. The media should show us, instead, the smiles of the women who win, and keep the Olympic and sporting spirit alive.